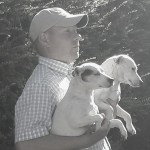 Steve was introduced to the character that is a Jack Russell at the age of 6 when his dad came home from the pub with a scruffy looking terrier pup. She ended up living at his granddads allotment with the chickens and pigs.

At the allotment is where Steve found out how much fun you can have with a terrier and a never ending supply of rats, he was hooked.

It wasn’t until 1999 and a chance meeting with Clive Matthews and John Collier at the Chatsworth show that Steve got his first show dog ‘Ronnie’. You could say it was the right place at the right time.

With lots of championship results and too many to mention first places with Ronnie and his offspring ‘Topdraw’ kennels was established.

With a lot of his time spent showing and judging, Steve still manages to get out with the dogs and like-minded people in his local area for vermin control.

Steve feels highly honoured to have been chosen to judge the 2018 National Show.

Any Fully Paid Up Member may Judge a Club Show within Great Britain Having Signed the Judges Declaration. A copy can be found in this section.

If you would like to become an approved judge for the JRTCGB then the following procedures are in place;-

Regional secretaries – Please Note that if you use a person to judge, who is not on any of the three lists below you must ensure they are a current member of the JRTCGB, give them a copy of the breed standard and they must sign a judges agreement.

To be included on the JRTCGB List of Approved G.B. Judges
A person must;
– Be a current member of good standing.
– Have been a member for a minimum of 2 consecutive years.
– Have judged a minimum of 2 region shows in Gt.Britain.
– Be recommended by a region for inclusion on the G.B. list.
– Have that recommendation accepted by the National Committee.
– Have signed the annual Judges Agreement.

To be included on the JRTCGB List of Approved Overseas Judges
A person must;
– Be a current member of good standing.
– Have been a member for a minimum of 5 consecutive years.
– Have been an approved G.B. Judge on the list for a minimum of 2 years.
-Be recommended by a region for inclusion on the Overseas list.
-Have that recommendation approved by the National Committee.
-Have signed the annual Judges Agreement.

To be included on this list a person must;
-Be a current fully paid up member
-Confident and willing to judge a club show.
-Have signed the annual Judges Declaration
-Send their contact details and short C.V. to both,
The National Chairman. Email jrtcgbchairman@hotmail.com
The National Secretary Email jrtcgbnatsecretary@hotmail.com